Have you ever wondered how the game is produced over the
internet? How box scores and stats are entered into the record book, or how you
can watch the game in real-time on your computer if you’re not able to make it
to the ballpark? It’s a job done entirely by one person … In this case,
me! My name is Jim Nelson, and I’m
the datacaster/stringer for the Fresno Grizzlies. I am in my fifth year with the
Grizzlies, working alongside the rest of my colleagues up in the stadium press
box.

To land my job, I started by first taking a 10-page written
test issued by Major League Baseball Advanced Media (MLBAM). This test is based
on general baseball knowledge, and included many obscure questions that only a
true baseball fan would know the answer to. My testing then advanced to calling
games on paper; I was sent a series of plays as if scoring a live game, and it
was up to me to determine the calls. Finally, after a series of telephone
interviews with MLB in New York, I was offered a job with the Fresno Grizzlies.
At that time, I had no idea what I was in for, but I am glad I made the
decision to pursue it!

My gamedays start about an hour before each game when I go
up to the press box and grab the lineups for each team. I take my seat right
behind home plate, which I believe is the best seat in the house!  I load the lineups, umpires, and even the
weather into the software 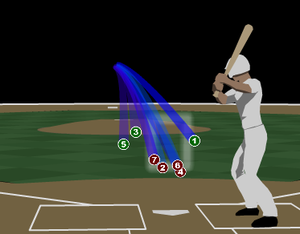 provided by MLBAM. Once I’ve made sure that all of the information is loaded
correctly, I get to go enjoy dinner with all the other folks in the press box.

Finally, it’s time to play ball! I sit in my seat and as the
game begins, I start entering strings of codes into the computer. The coding is
much like a foreign language. I record every single movement, from pitch
location, balls, strikes, hits, walks, errors, and all player movement on the
base paths. For example, 54/sac/bg.1-2
translates into a sacrifice bunt hit to
the 3rd baseman, with the 2nd baseman covering 1st, and the runner advancing to
2nd base. Complicated, yet simple! Every move made during the game must be
entered– even things like a coach visiting the mound– as my accounting is the
official statistic for the record book. So who watches me, to see that I don’t make
an error? During the game, I am connected via AIM with MLBAM colleagues in New
York City, who watch each and every major and minor league game in play. If I
make a mistake, they are able to catch it, and let me know. I then make the
correction as needed. It’s always a
good night when I make it through an entire game without hearing from NYC!

Finally, while you’re watching fireworks or other post-game
activities, or filing out of the stadium, I will be busy in the press box
reviewing my work; the stats will be compiled and the box score created. I get final
approval from New York that all of my information is good. At that point, the box
score is printed. I hand the information over to the Grizzlies media personnel,
who distribute it to both managers and all media, and at that point, it becomes
the game of record.

If you’re not able to make it out to the ballpark, I welcome
you to follow the game in real time through the link at
http://www.fresnogrizzlies.com.

When the word “Intern” comes to mind, most people think of a
young, naďve college kid all bright-eyed and bushy-tailed, full of ambition,
slowly eased into the business world by being assigned mundane duties such as
making copies, distributing mail, getting coffee for the entire office, or
anything else that falls under the last line in most job descriptions: “All
other assigned duties.”

Fortunately, my internship with the Grizzlies has
materialized into more than such a role. Sure, there are going to be times when,
as interns, we will be called to do such things as making copies because we are
stuck at the bottom of the totem pole, but it is safe to say we are allowed to
make the most of our own experiences here at Chukchansi Park. 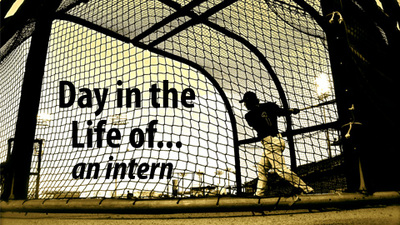 When I step into the office around 10 in the morning
(without the office’s daily dose of caffeine mind you), I try to jump into a
project that was given to me the day before. It gives me an ease of mind
because I know what I need to do immediately while it also helps those hierarchically
above us who are also just getting into the office after a late game from the
night before (Groggy co-workers + energetic but conniving questions of “Do you
have anything for me to do?” = bad start to an always good day). For example,
right now I have been digging deep for some facts about your Fresno Grizzlies
so that we can share them with you via the spanking new video boards at
Chukchansi Park.

(Did you know Brock Bond reached base in 51 consecutive
games last year? That’s longer than some players’ careers! Or that Buster Posey
played all nine positions in one game during his time at Florida State? At the
same time? Ok, that last part was not true but the first one was. Either way, cue
the Chuck Norris-esque websites now, Giants fans, because the legend of Gerald
“Buster” Posey continues to grow.)

Now, I am a baseball junkie, hence interning with a
professional baseball team, so any cool facts/info I dig up about our players are
awesome to me, and I hope the fans find it interesting as well. The research
may become less exciting farther and farther in, but we when I stumble upon
something new, a dose of baseball Red Bull kicks in. Besides, things change on
the fly so often in the office, we all can be working on numerous things at one
time. This can help eliminate potential boredom.

Other daily duties, specifically on game days, include
creating the pre-game scroll that we roll through on the video board with
statistical leaders in the PCL and on the Grizzlies. I usually start this
around 3 in the afternoon to make sure it’s done with plenty of time before
gates open at 5:30. Also, interesting facts and trends about the team we find go
on the scroll as well. As interns, we help set up the press box food so the
ravenous members of the media upstairs appease their growling stomachs (Lesson
#1 I learned during my first internship last season: Never screw up the food!
You can quickly learn the darker side of others when the spread does not meet
the standards of our entry-level foodies.)

During the game, I work in the video room, operating part of
the video board. A group of us throw up the headshots of players, stats, videos,
music, sponsorships, etc; all following the script laid out to us, trying to
provide the fans with information and entertainment to improve their experience
at the game.

After the game, around 10-ish or whenever the Grizzlies
finally claim victory, I edit some highlights from the game and send it out to the local television stations. This is something new from last year, but it is
very important for us and the news. It helps them have footage for their
telecasts, especially with late-game footage after the cameras have gone back
to station and begin prep for the late evening news. For us, it helps us give
those fans that could not make it out to the game some images and video they
can talk about the next day around the water cooler.

While the whole experience is worthwhile, my favorite part
of the internship gig is interacting with the players while trying to set up
interviews with media. Professional athletes and celebrities are often cast as in-human
because they play a character in our lives. We only see them on TV or on the
internet. Obviously, the Grizzlies are just your everyday human beings (with a
slight increase in baseball-playing ability relative to, say your neighbor);
not characters or robots without simple human interests like you and I. Since
baseball players have downtime, movies and music are always good topics of
conversations, as opposed to last night’s extraordinary (or less-than-ordinary)
performance at the plate.

Since I cannot say I have bad experiences with my internship
(and no, that is not being said because my bosses will more than likely read
this), I will provide insight into the one thing most people are baffled by the
most: the amount of hours put in. If you work for a baseball team, you will
probably be working at least 12-hour days during home games. Now, add eight of
those together for the typical homestand, you can find yourself working almost
100 hours in a week (homestands don’t always conveniently begin on Mondays like
most work weeks.).

A uniform “ugh” usually follows when others hear of so many
hours at work, but for all of us, it’s great because we are working jobs we
like. People work in sports because they want to be there; few, if any, settle
for a job in sports. Sports allow people to find something they are passionate
about and can be creative with. Twelve hours may be seem like more than
necessary, but when we walk into our office and see a baseball field outside,
apathy and boredom quickly disappear like a moonshot soaring into Borchard’s Orchard in left-center.

So it’s been
a while since our last post, and since then the Grizzlies have done nothing but
go out and notch the best 50-game stretch to open a season in franchise
history. The team has led by as many as 10.5 games over second place in the Pacific
South Division of the PCL, and had 33 wins against just 18 losses to start
June. Not bad for a team that has seen the post-season only once in its first
12 years as a franchise- the inaugural season, all the way back in 1998.

Just as the
Grizzlies have settled in, so have we over here at Yard Work, getting our 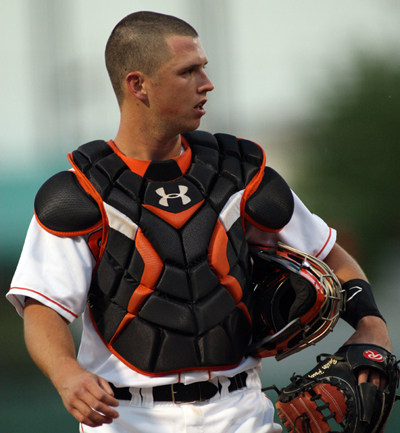 reinforcements on board in the form of our summer interns. With extra hands on
deck on, we will be bringing you regular updates. Look for the first Drag Kings Mailbag, installments of our Day In The Life Of… series and much more. You, the
fan, will even have a chance to get involved, as we encourage you to tell us
why yours is the Best Seat In The House. Starting in June, we will pick the
Yard Work Fan of the Month each month through the end of the season. We will
feature your story and have a full pictorial and interview with you about your
Grizzlies experience.

Now, I
promised you two more interviews, so here is the first one.

When I spoke
to Buster Posey in the home locker room at Scottsdale Stadium in the middle of
Spring Training, no decisions had been made yet as to where anyone would start
the season. Posey was just focused on soaking up as much as he could from being
around the Major League pitching staff every day, appreciating the invaluable
experience he was gaining in the process.

When I asked
him if there were any surprise arms to keep an eye on this season, he dropped
an intriguing name on me- not one that I expected. As it turned out, that
pitcher would start the season with Posey in Fresno and actually beat him to
San Francisco this season. The two have since been reunited, with Posey’s
Memorial Day weekend promotion to the Giants. Listen in to find out which
former Grizzly and current Giant Buster had an eye on all the way back in
March.