Casey Bond hit a home run in his first at-bat when it comes to acting in a major film. Portraying former Major League pitcher Chad Bradford, Bond was among a cast and crew that has been nominated for six Academy Awards for their work on the movie, “Moneyball.”

The Grizzlies first talked to Bond before the movie was released, but with the award season in full throttle, Bond was nice enough to take the time to discuss what is new since the movie debut. 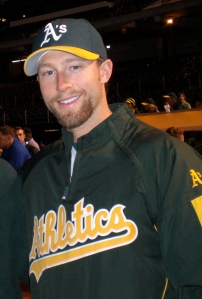 Yard Work: We ended the last post wondering what the future may bring for you. So, what is new?

Casey Bond: So far 2012 has had a great start with all these awards. I am auditioning for some small things and working on producing an independent film. Producing is a part of industry that I wanted to dive into as it will allow me to take ownership of the work. I will be able to act and produce in a piece that is pretty close to me.

YW: How did you find out “Moneyball” was nominated for six Oscars?

CB: I knew the day they would be released but not the exact time. So, I woke up to text messages, emails and Twitter messages from all sorts of people telling me about the great news.

We heard all the Oscar buzz and with the momentum from the Golden Globe and Screen Actors Guild (SAG) awards, we were eager to learn about the nominations. I can’t even describe, though, how it feels. It’s a great start and I could not be more thankful.

YW: Have you heard from Chad Bradford to see what he thought about your performance acting as him?

CB: I have not met Chad in person, but I did first talk to him a couple of weeks prior to filming. I contacted a mutual friend and said, “You are not going to believe this, but is there any way I can get [Chad Bradford’s] phone number and talk to him?”

He also ended up calling me right after he saw the movie and said, “Man, great job.” I was encouraged to hear him say I did well.

Chad ended up being just a great guy and so willing with his time. I’m representing a real person, and it is very important for me to talk to him. Next time I am in Jackson, Mississippi [Bradford’s hometown], I plan on meeting up with him.

YW:What is going through your head when you watch yourself on the big screen in a baseball movie after growing up dreaming of playing in the big leagues one day? 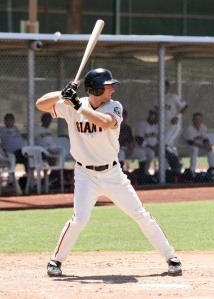 CB: Anytime you put hard work into something and see the result and others encourage you, it is awesome. We got our first taste of an audience reaction at the Toronto Film Festival. After the film ended, we received a standing ovation, which was phenomenal. Ever since the movie came out, I have talked to people I haven’t heard from in a long time. All the words of encouragement made this process that much more special.

YW: What are some similarities between being a professional baseball player and being an actor?

CB: The biggest thing is the mental preparation. It directly translates from athletics to the acting world. Auditions can be very spur of the moment, like opportunities or plays in baseball. Baseball is a game filled with failures, such as getting one hit in your four at-bats, and acting has its own failures as well. Not succeeding on the baseball field on a given day created a mental strength.

YW: Who has been your biggest influence in your new career?

CB: It comes down to great parents. They have been great supporters. Another important person has been my first college coach, Brian Schoop, at Birmingham-Southern College. First of all, our team was not just a team, but brothers. Coach Schoop established that family-like culture, and it brought another kind of strength to you. We learned how to face adversity together, and I draw upon my experiences from Birmingham-Southern often.